The Great Parchment Book of the Honourable The Irish Society is a major survey, compiled in 1639 by a Commission instituted under the Great Seal by Charles I, of all those estates in Derry managed by the City of London through the Irish Society and the City of London livery companies. It represents a hugely important source for the City of London’s role in the Protestant colonisation and administration of Ulster. Damaged as the result of a fire at Guildhall in 1786, it has been unavailable to researchers for over 200 years. However, the manuscript has remained part of the City of London’s collections held at London Metropolitan Archives (LMA reference CLA/049/EM/02/018.)

The ‘Society of the Governor and Assistants, London, of the New Plantation in Ulster, within the realm of Ireland’ (known after the Restoration as the Irish Society) was formed in 1609 by the City of London Corporation, to manage the estates in Derry which James I had obliged it to take on, as part of the plantation of Ulster. The Irish Society took charge of the overall management of the Irish estates, with direct control of the new City of Derry (also incorporated in the same charter of 1613, and renamed Londonderry). However, the first phase of the existence of the Irish Society was short lived. The Great Parchment Book was compiled in the late 1630s when Charles I claimed the estates (constituting the entire county) as forfeit after a politically-motivated case in Star Chamber ruled that the Londoners had not fulfilled their obligations of plantation.

The settlement of the forfeited estates of the Irish Society and the Twelve Great Livery Companies of London was carried out by virtue of a Commission from the King under the Great Seal dated 11 March 1639. This Commission authorised Sir Ralph Whitfield, serjeant-at-law, Thomas Fotherley, gentleman of the King’s Privy Chamber, Bramhall, Bishop of Derry and Sir William Parsons, Surveyor General of Ireland to collect and receive all sums due to the King in Londonderry, to seize on the King’s behalf all castles, manors, lands and tenements lately belonging to the Londoners, and to conclude, on terms most profitable to the King, new contracts for leases of estates of inheritance with the existing tenants and others.

Whitfield and Fotherley were the active members of the Commission, arriving in Ireland in April, and finishing about the beginning of October, 1639. Attended by a clerk and two assistants, they toured the proportions, and copies of all the contracts were entered in a “great parchment Booke”, thereafter presented to the King. This book subsequently passed into the hands of the Irish Society. In February 1786, a fire in the Chamber of London at the Guildhall in the City of London destroyed most of the early records of the Irish Society, so that very few 17th century documents remain. Among those which survived is the Great Parchment Book.  However, the fire caused such dramatic shrivelling and fire damage to the manuscript that it has been completely unavailable to researchers since this date (see, for example, T W Moody, The Londonderry Plantation, 1609-41: the City of London and the Plantation in Ulster, Belfast 1939, p.399).  It was presumably kept because of its evident historical significance.  Given the relative paucity of archival records for early modern Ireland, the manuscript contains key data about landholding and population in Ulster at this time, as well as the county’s relationship with London. 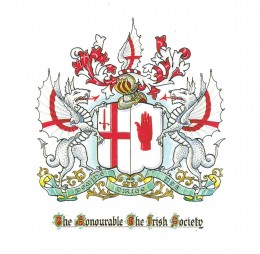