Ulster was finally brought under the control of Elizabeth I’s government at the beginning of the 17th century following a long struggle between the Tudor monarchy and the Gaelic chieftains. This followed the defeat of the chieftains at the Battle of Kinsale in 1601 after a war lasting 9 years. Although the Gaelic chieftains were allowed to remain on their land, their positions had been weakened. A group of them left Ireland for the continent in 1607, never to return. The “Flight of the Earls”, as it was known, was seen as treason by James I’s government and their lands were confiscated. This important event opened the way for James I to further increase his control over Ulster by settling tens of thousands of settlers from England, Scotland and Wales on the confiscated lands.

Surveying and planning for the plantation took place during 1608 and 1609 and the plantation proper began in 1610. The towns of Derry and Coleraine, as well as much of the lands that were to become the County of Londonderry – ie the whole territory bounded by the River Foyle, the sea and the River Bann, and the fisheries of the two rivers – were granted to the City of London Corporation, which was charged with planting them. The ‘Society of the Governor and Assistants, London, of the New Plantation in Ulster, within the realm of Ireland’ (known after the Restoration as the Irish Society) was formed in 1609 by the City of London, to manage the estates which it been obliged very reluctantly to take on. The Irish Society took charge of the overall management of the Irish estates, with direct control of the new city of Derry (which was also incorporated in the same charter of 29 March 1613 and renamed Londonderry) and of the town of Coleraine.

However, the first phase of the existence of the Irish Society was short lived. The Great Parchment Book was compiled in the late 1630s when Charles I claimed the estates as forfeit after a politically-motivated case in Star Chamber ruled that the Londoners had not fulfilled their obligations of plantation (see Book History.) The City of Londonderry is very much a product of the plantation and played a pivotal role in safeguarding the plantation. Its walls, which are still intact today, repulsed sieges in 1641, 1649 and 1689. 2013 marks the 400th anniversary of the building of the city walls (1613-1619) and the Great Parchment Book project is an integral part of the events planned to commemorate this (see Project History.)

By the end of the 17th century, Ulster, which had been the most Gaelic part of Ireland, had become the most “British”. The plantation created the Ulster we know today – its socio-economic base, its religious and political diversity, and its shared heritage.

Further historical background can be found on the Irish Society’s website.

A series of four booklets developed by Derry City Heritage and Museums Service in 2010 in partnership with Donegal County Museum and the University of Ulster also provide a useful, more detailed, introduction to the history of the Ulster Plantation.

The definitive history is Curl, J. S. (2000). The Honourable the Irish Society and the Plantation of Ulster, 1608-2000: the City of London and the colonisation of County Londonderry in the Province of Ulster in Ireland: a history and critique. Chichester, West Sussex: Phillimore. 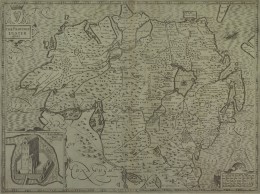 1601  Gaelic chieftains defeated at the Battle of Kinsale

1609  The Honourable the Irish Society established

1613  The City and County of Londonderry incorporated by Royal Charter; work starts on building the city walls

2013  400th anniversary of the building of the city walls